Myths We Tell Ourselves About Estate Planning 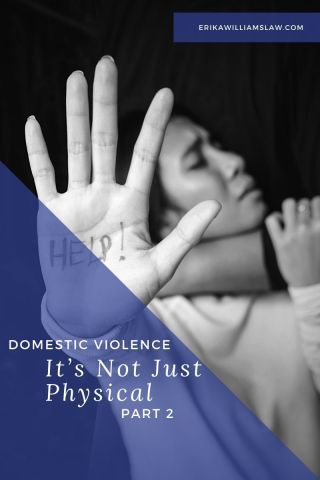 In the United States, October is the National Domestic Violence Awareness Month. As part of our own mission to help families in crisis, the Law Office of Erika A. Williams is publishing this 4-part series on domestic violence to shed light on all forms of domestic violence; the ways that it shows up in families’ lives; and, what you can do to keep yourself, your family, and your loved ones safe.

What Is Domestic Violence, Really?:

What Does the Law Say Domestic Violence Is?:

In California, domestic violence, depending on the nature of the act and the seriousness of the resultant injuries, can be either a misdemeanor or a felony. For that reason, domestic violence appears in separate sections.

Understandably, television has caused a lot of confusion about the legal jargon. A battery, not assault, is any willful and unlawful use of force or violence upon the person of another. (CA PC § 242). Assault, on the other hand, is an unlawful attempt, coupled with a present ability, to commit a violent injury on the person of another. (CA PC § 240).

“any person who willfully inflicts corporal injury resulting in a traumatic condition upon a victim described in subdivision (b) is guilty of a felony, and upon conviction, thereof shall be punished by imprisonment in the state prison for two, three, or four years, or in a county jail for not more than one year, or by a fine of up to six thousand dollars ($6,000), or by both that fine and imprisonment.”

Importantly,  PC § 273.5(d) defines a traumatic condition as a wound, or external or internal injury, including but not limited to injury as a result of strangulation or suffocation, whether minor or serious in nature, caused by physical force.

There are separate code sections that describe and provide for the criminal penalties for both child abuse or endangerment and for elder abuse. Both of these penal codes provide for not only physical abuse, but also emotional, psychological, and financial abuse. Be sure to continue checking out our blog for further details on these issues.

With respect to the California Family Code (FC), Section 6200 through 6460, et. seq., provides the Domestic Violence Prevention Act (DVPA). Under FC § 6203, abuse is NOT limited to the actual infliction of physical injury or assault. The DVPA defines domestic violence as intentionally or recklessly causing or attempting to cause bodily injury; sexual assault; placing one in reasonable fear of imminent serious bodily injury to themselves or someone else; and/or engaging in any behavior that has been or could be enjoined pursuant to Section 6320.

To be clear, according to FC § 6320 (a), behavior that can be enjoined (which is just a fancy word for stopped) includes ALL of the following:

Pursuant to FC § 6211, domestic violence is abuse that is perpetrated against any of the following:

Notably, the Family Code broadens the categories of people that can find civil relief and protection in the family court.

These terms, though, don’t really give us a real picture of what domestic violence can look like. It can take many forms and as each definition makes clear, it isn’t just harmful touching. While it can be physical violence that is perpetrated against an individual, it can also be emotional, psychological, verbal, sexual, and economic abuse.

Join us for the next post in this 4-part series, as we clarify what domestic violence can look like.

If You Need Help NOW:

If you or someone you know is a victim of domestic violence, but don’t know what your legal options are, call the Law Office of Erika A. Williams at (855) 972-1644 or visit our Contact page to schedule a consultation or case evaluation.

The Law Office of Erika A. Williams is a law firm that represents clients throughout California. The information on this website is for general information purposes only and should not be taken as legal advice for any individual case or situation. Legal websites like this one are a form of attorney advertising. Viewing this website does not create an attorney-client relationship. Erika Williams is licensed to practice law in California, maintains an office in Los Angeles, and practices law only in California courts, and does not seek to represent anyone based solely on a visit to this website.

Reviews, including testimonials or endorsements listed on this website, do not constitute a guarantee, warranty, or prediction regarding the outcome of your particular legal matter.

This website uses cookies to improve your experience while you navigate through the website. Out of these, the cookies that are categorized as necessary are stored on your browser as they are essential for the working of basic functionalities of the website. We also use third-party cookies that help us analyze and understand how you use this website. These cookies will be stored in your browser only with your consent. You also have the option to opt-out of these cookies. But opting out of some of these cookies may affect your browsing experience.
Necessary Always Enabled
Necessary cookies are absolutely essential for the website to function properly. These cookies ensure basic functionalities and security features of the website, anonymously.
Functional
Functional cookies help to perform certain functionalities like sharing the content of the website on social media platforms, collect feedbacks, and other third-party features.
Performance
Performance cookies are used to understand and analyze the key performance indexes of the website which helps in delivering a better user experience for the visitors.
Analytics
Analytical cookies are used to understand how visitors interact with the website. These cookies help provide information on metrics the number of visitors, bounce rate, traffic source, etc.
Advertisement
Advertisement cookies are used to provide visitors with relevant ads and marketing campaigns. These cookies track visitors across websites and collect information to provide customized ads.
Others
Other uncategorized cookies are those that are being analyzed and have not been classified into a category as yet.
SAVE & ACCEPT